Skip to content
Vivian Chinasa Ezugha, The Rising 26May18 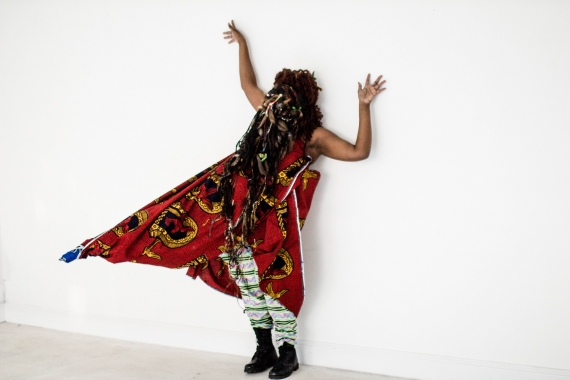 Because of hair; the dichotomy of culture and identity, image by Rosie Cooper (rxcrose.com)

Chinasa Vivian Ezugha is interested in history and how history is performed in the mundanity of everyday living; for her, performance is an embodiment of past, present and future experiences.

Born in Nigeria, Enugu state in 1991, Ezugha makes work that connects her to her cultural heritage and to questions about her identity as a black woman living in England. Vivian is an interdisciplinary artist, working in Live Art, film and drawing. Having graduated from Aberystwyth University, School of Art in 2014, she currently lives and works in Norwich. Ezugha’s work has been shown in New York, Berlin and she has performed in venues across the UK. She is the founder of LIVE Art in Wymondham, a new platform for artists working in Live Art.

Ezugha is currently a New Blood artist at IBT: Bristol’s International Festival, where she will present her year-long project Because of hair; the dichotomy of culture and identity. You can also see her new work Biafra, British Politics, Ibo Brexit at Rich Mix, London on February 18.

“There’s a stage where the gothic and the erotic play together. This stage carries a drum shaped like a human. This drum when beaten terrifies the strongest men and stops the gaze of them that pass by. The drum holds a secret that is revealed in its concealment. It dances with the truth and shapes the knife that cuts the womb of history. In its rawest form, it is just a clay pot but when filled with the stories of mankind it becomes the sound of war. Sometimes the drum speaks to the individual, other times it speaks to the mass.

As a black woman living in the UK; hair plays an important role in the way I see myself in relation to my peers. Coming from Nigeria at the age of 8, I was astonished to see the differences in the visual representation of hair across cultures. The length, texture and style portray an image of difference in relation to my own hair, which was shaved. In many ways hair symbolises a process of rejection and acceptation. Philosophically hair in African culture is used to represent social and economic power; as a material that is constantly malleable by human hand, hair becomes an object, subject and a symbol of identity and culture.”